As we continue to pray for the people of Japan, this Saturday
marks the beginning of the Cherry Blossom Festival in Washington, DC.
If you have ever been lucky enough to be there during
peak blossom time, it is enchanting. 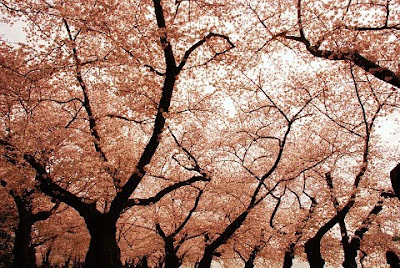 History of the Cherry Blossom Trees and Festival
Each year, the National Cherry Blossom Festival commemorates the 1912 gift of 3,000 cherry trees from Mayor Yukio Ozaki of Tokyo to the city of Washington, DC. The gift and annual celebration honor the lasting friendship between the United States and Japan and the continued close relationship between the two countries.
In a simple ceremony on March 27, 1912, First Lady Helen Herron Taft and Viscountess Chinda, wife of the Japanese ambassador, planted the first two trees from Japan on the north bank of the Tidal Basin in West Potomac Park. Between the governments of the two countries, the financial backing of Dr. Jokichi Takamine, a world-famous chemist and the founder of what today is the global pharmaceutical company Daiichi Sankyo, Dr. David Fairchild of the U.S. Department of Agriculture, Eliza Scidmore, first female board member of the National Geographic Society, and First Lady Helen Herron Taft, the trees arrived in Washington.
A first batch of 2,000 trees arrived diseased in 1910, but did not deter the parties. Just two years later in 1912, new trees arrived and were planted. These are the trees that now turn the Tidal Basin into a cloud of pink each spring for all to enjoy.
In 1915, the United States Government reciprocated with a gift of flowering dogwood trees to the people of Japan. A group of American school children reenacted the initial planting in 1927 and the first “festival” was held in 1935, sponsored by civic groups in the nation’s capital.
First Lady Lady Bird Johnson accepted 3,800 more trees in 1965. In 1981, the cycle of giving came full circle. Japanese horticulturists were given cuttings from the trees to replace some cherry trees in Japan which had been destroyed in a flood.
The Festival was expanded to two weeks in 1994 to accommodate a diverse activity schedule during the blooming period. Today, more than a million people visit Washington, DC each year to admire the blossoming cherry trees and attend events that herald the beginning of spring in the nation’s capital.
The above information was taken from
http://www.nationalcherryblossomfestival.org/

Don't forget to enter my giveaway~information here.
Posted by Beeutiful by Design at 1:22 PM